Structural engineering is a sub-discipline of civil engineering in which structural engineers are trained to design the ‘bones and muscles’ that create the form and shape of man made structures. Structural engineers need to understand and calculate the stability, strength and rigidity of built structures for buildings and non building structures. The structural designs are integrated with those of other designers such as architects and building services engineer and often supervise the construction of projects by contractors on site. They can also be involved in the design of machinery, medical equipment, and vehicles where structural integrity affects functioning and safety.

Pont du Gard, France, a Roman era aqueduct circa 19 BC.

Structural engineering dates back to 2700 B.C.E. when the step pyramid for Pharaoh Djoser was built by Imhotep, the first engineer in history known by name. Pyramids were the most common major structures built by ancient civilisations because the structural form of a pyramid is inherently stable and can be almost infinitely scaled (as opposed to most other structural forms, which cannot be linearly increased in size in proportion to increased loads).

The structural stability of the pyramid, whilst primarily gained from its shape, relies also on the strength of the stone from which it is constructed, and its ability to support the weight of the stone above it.The limestone blocks were often taken from a quarry near the build site and have a compressive strength from 30 to 250 MPa (MPa = Pa * 10^6).Therefore, the structural strength of the pyramid stems from the material properties of the stones from which it was built rather than the pyramid’s geometry.

Throughout ancient and medieval history most architectural design and construction was carried out by artisans, such as stonemasons and carpenters, rising to the role of master builder. No theory of structures existed, and understanding of how structures stood up was extremely limited, and based almost entirely on empirical evidence of ‘what had worked before’. Knowledge was retained by guilds and seldom supplanted by advances. Structures were repetitive, and increases in scale were incremental.

No record exists of the first calculations of the strength of structural members or the behaviour of structural material, but the profession of structural engineer only really took shape with the Industrial Revolution and the re-invention of concrete. The physical sciences underlying structural engineering began to be understood in the Renaissance and have since developed into computer-based applications pioneered in the 1970s.

The history of structural engineering contains many collapses and failures. Sometimes this is due to obvious negligence, as in the case of the Pétion-Ville school collapse, in which Rev. Fortin Augustin “constructed the building all by himself, saying he didn’t need an engineer as he had good knowledge of construction” following a partial collapse of the three-story schoolhouse that sent neighbors fleeing. The final collapse killed 94 people, mostly children.

In other cases structural failures require careful study, and the results of these inquiries have resulted in improved practices and greater understanding of the science of structural engineering. Some such studies are the result of forensic engineering investigations where the original engineer seems to have done everything in accordance with the state of the profession and acceptable practice yet a failure still eventuated. A famous case of structural knowledge and practice being advanced in this manner can be found in a series of failures involving box girders which collapsed in Australia during the 1970s. 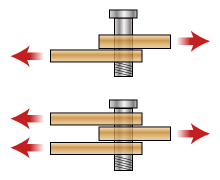 Structural engineering depends upon a detailed knowledge of applied mechanics, materials science and applied mathematics to understand and predict how structures support and resist self-weight and imposed loads.

To apply the knowledge successfully a structural engineer generally requires detailed knowledge of relevant empirical and theoretical design codes, the techniques of structural analysis, as well as some knowledge of the corrosion resistance of the materials and structures, especially when those structures are exposed to the external environment. Since the 1990s,

specialist software has become available to aid in the design of structures, with the functionality to assist in the drawing, analyzing and designing of structures with maximum precision; examples include AutoCAD, StaadPro, ETABS, Prokon, Revit Structure, Inducta RCB, etc. Such software may also take into consideration environmental loads, such as from earthquakes and winds.

The role of a structural engineer today involves a significant understanding of both static and dynamic loading, and the structures that are available to resist them. The complexity of modern structures often requires a great deal of creativity from the engineer in order to ensure the structures support and resist the loads they are subjected to. A structural engineer will typically have a four or five year undergraduate degree, followed by a minimum of three years of professional practice before being considered fully qualified. Structural engineers are licensed or accredited by different learned societies and regulatory bodies around the world (for example, the Institution of Structural Engineers in the UK). Depending on the degree course they have studied and/or the jurisdiction they are seeking licensure in, they may be accredited (or licensed) as just structural engineers, or as civil engineers, or as both civil and structural engineers. Another international organisation is IABSE(International Association for Bridge and Structural Engineering). The aim of that association is to exchange knowledge and to advance the practice of structural engineering worldwide in the service of the profession and society. 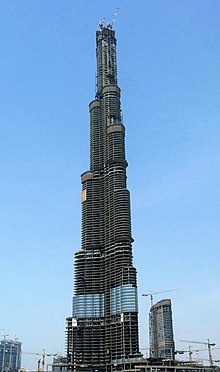 Burj Khalifa, in Dubai, the world’s tallest building, shown under construction in 2007 (since completed)

The architect is usually the lead designer on buildings, with a structural engineer employed as a sub-consultant. The degree to which each discipline actually leads the design depends heavily on the type of structure. Many structures are structurally simple and led by architecture, such as multi-storey office buildings and housing, while other structures, such as tensile structures, shells and gridshells are heavily dependent on their form for their strength, and the engineer may have a more significant influence on the form, and hence much of the aesthetic, than the architect.

The structural design for a building must ensure that the building is able to stand up safely, able to function without excessive deflections or movements which may cause fatigue of structural elements, cracking or failure of fixtures, fittings or partitions, or discomfort for occupants. It must account for movements and forces due to temperature, creep, cracking and imposed loads. It must also ensure that the design is practically build able within acceptable manufacturing tolerances of the materials. It must allow the architecture to work, and the building services to fit within the building and function (air conditioning, ventilation, smoke extract, electrics, lighting etc.). The structural design of a modern building can be extremely complex, and often requires a large team to complete.

1 thought on “WHAT IS STRUCTURAL ENGINEERING ?”