Surveying or land surveying is the technique, profession, art and science of determining the terrestrial or three-dimensional positions of points and the distances and angles between them. A land surveying professional is called a land surveyor. These points are usually on the surface of the Earth, and they are often used to establish maps and boundaries for ownership, locations, such as building corners or the surface location of subsurface features, or other purposes required by government or civil law, such as property sales.

Surveying has been an element in the development of the human environment since the beginning of recorded history. The planning and execution of most forms of construction require it. It is also used in transport, communications, mapping, and the definition of legal boundaries for land ownership. It is an important tool for research in many other scientific disciplines.

The International Federation of Surveyors defines the function of surveying as:

A surveyor is a professional person with the academic qualifications and technical expertise to conduct one, or more, of the following activities;

Licensing requirements vary with jurisdiction, and are commonly consistent within national borders. Prospective surveyors usually have to receive a degree in surveying, followed by a detailed examination of their knowledge of surveying law and principles specific to the region they wish to practice in, and undergo a period of on-the-job training or portfolio building before they are awarded a license to practise. Licensed surveyors usually receive a post nominal, which varies depending on where they qualified. The system has replaced older apprenticeship systems.

A licensed land surveyor is generally required to sign and seal all plans. The state dictates the format, showing their name and registration number.

In many jurisdictions, surveyors must mark their registration number on survey monuments when setting boundary corners. Monuments take the form of capped iron rods, concrete monuments, or nails with washers. 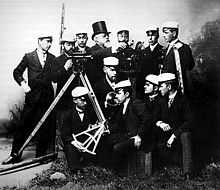 Most countries’ governments regulate at least some forms of surveying. Their survey agencies establish regulations and standards. Standards control accuracy, surveying credentials, monumentation of boundaries and maintenance of geodetic networks. Many nations devolve this authority to regional entities or states/provinces. Cadastral surveys tend to be the most regulated because of the permanence of the work. Lot boundaries established by cadastral surveys may stand for hundreds of years without modification.

Most jurisdictions also have a form of professional institution representing local surveyors. These institutes often endorse or license potential surveyors, as well as set and enforce ethical standards. The largest institution is the International Federation of Surveyors (Abbreviated FIG, for French: Fédération Internationale des Géomètres). They represent the survey industry worldwide.

3 thoughts on “WHAT IS SURVEYING ?”