A theodolite is a precision optical instrument for measuring angles between designated visible points in the horizontal and vertical planes. The traditional use has been for land surveying, but they are also used extensively for building and infrastructure construction, and some specialized applications such as meteorology and rocket launching.

It consists of a moveable telescope mounted so it can rotate around horizontal and vertical axes and provide angular readouts. These indicate the orientation of the telescope, and are used to relate the first point sighted through the telescope to subsequent sightings of other points from the same theodolite position. These angles can be measured with great accuracy, typically to milliradian or seconds of arc. From these readings a plan can be drawn, or objects can be positioned in accordance with an existing plan. The modern theodolite has evolved into what is known as a total station where angles and distances are measured electronically, and are read directly to computer memory.

In a transit theodolite, the telescope is short enough to rotate through the zenith, otherwise for non-transit instruments vertical (or altitude), rotation is restricted to a limited arc.

The optical level is sometimes mistaken for a theodolite, but it does not measure vertical angles, and is used only for levelling on a horizontal plane. 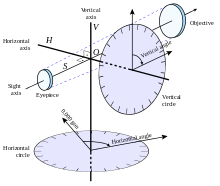 The axes and circles of a theodolite 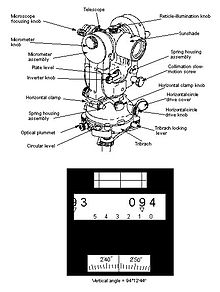 Diagram of an optical readout theodolite

Temporary adjustments are a set of operations necessary in order to make a theodolite ready for taking observations at a station. These include its setting up, centering, leveling up and elimination of parallax, and are achieved in four steps:

Sightings are taken by the surveyor, who adjusts the telescope’s vertical and horizontal angular orientation so the cross-hairs align with the desired sighting point. Both angles are read either from exposed or internal scales and recorded. The next object is then sighted and recorded without moving the position of the instrument and tripod.

The earliest angular readouts were from open vernier scales directly visible to the eye. Gradually these scales were enclosed for physical protection, and finally became an indirect optical readout, with convoluted light paths to bring them to a convenient place on the instrument for viewing. The modern digital theodolites have electronic displays.

Index error – The angles in the vertical axis should read 90° (100 grad) when the sight axis is horizontal, or 270° (300 grad) when the instrument is transited. Half of the difference between the two positions is called the “index error”. This can only be checked on transit instruments.

Index error, horizontal-axis error (‘trunnion-axis error’) and collimation error are regularly determined by calibration and are removed by mechanical adjustment. Their existence is taken into account in the choice of measurement procedure in order to eliminate their effect on the measurement results of the theodolite. 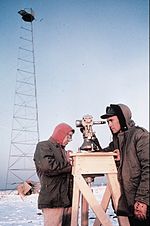 Triangulation, as invented by Gemma Frisius around 1533, consists of making such direction plots of the surrounding landscape from two separate standpoints. The two graphing papers are superimposed, providing a scale model of the landscape, or rather the targets in it. The true scale can be obtained by measuring one distance both in the real terrain and in the graphical representation.

Modern triangulation as, e.g., practised by Snellius, is the same procedure executed by numerical means. Photogrammetric block adjustment of stereo pairs of aerial photographs is a modern, three-dimensional variant.

In the late 1780s, Jesse Ramsden, a Yorkshireman from Halifax, England who had developed the dividing engine for dividing angular scales accurately to within a second of arc (≈ 0.0048 mrad or 4.8 µrad), was commissioned to build a new instrument for the British Ordnance Survey. The Ramsden theodolite was used over the next few years to map the whole of southern Britain by triangulation.

In network measurement, the use of forced centering speeds up operations while maintaining the highest precision. The theodolite or the target can be rapidly removed from, or socketed into, the forced centering plate with sub-millimeter precision. Nowadays GPS antennas used for geodetic positioning use a similar mounting system. The height of the reference point of the theodolite—or the target—above the ground benchmark must be measured precisely.

The term transit theodolite, or transit for short, refers to a type of theodolite that was developed in the early 19th century. It was popular with American railroad engineers pushing west, and it replaced the railroad compass, sextant and octant. It features a vertical circle which is graduated through the full 360 degrees and a telescope that could “flip over” (“transit the scope”). By reversing the telescope and at the same time rotating the instrument through 180 degrees about the vertical axis, the instrument can be used in ‘plate-left’ or ‘plate-right’ modes (‘plate’ refers to the vertical protractor circle). By measuring the same horizontal and vertical angles in these two modes and then averaging the results, centering and collimating errors in the instrument can be eliminated. Some transit instruments are capable of reading angles directly to thirty arc-seconds (≈ 0.15 mrad). Modern theodolites are usually of the transit-theodolite design, but engraved plates have been replaced with glass plates designed to be read with light-emitting diodes and computer circuitry, greatly improving accuracy up to arc-second (≈ 0.005 mrad) levels.

Use with weather balloons

There is a long history of theodolite use in measuring winds aloft, by using specially-manufactured theodolites to track the horizontal and vertical angles of special weather balloons called ceiling balloons or pilot balloons (pibal). Early attempts at this were made in the opening years of the nineteenth century, but the instruments and procedures weren’t fully developed until a hundred years later. This method was extensively used in World War II and thereafter, and was gradually replaced by radio and GPS measuring systems from the 1980s onward.

The pibal theodolite uses a prism to bend the optical path by 90 degrees so the operator’s eye position does not change as the elevation is changed through a complete 180 degrees. The theodolite is typically mounted on a rugged steel stand, set up so it is level and pointed north, with the altitude and azimuth scales reading zero degrees. A balloon is released in front of the theodolite, and its position is precisely tracked, usually once a minute. The balloons are carefully constructed and filled, so their rate of ascent can be known fairly accurately in advance. Mathematical calculations on time, rate of ascent, azimuth and angular altitude can produce good estimates of wind speed and direction at various altitudes.[17] 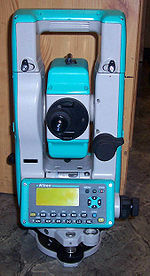 In modern electronic theodolites, the readout of the horizontal and vertical circles is usually done with a rotary encoder. These produce signals indicating the altitude and azimuth of the telescope which are fed to a microprocessor. CCD sensors have been added to the focal plane of the telescope allowing both auto-targeting and the automated measurement of residual target offset. All this is implemented in embedded software of the processor.

Many modern theodolites are equipped with integrated electro-optical distance measuring devices, generally infrared based, allowing the measurement in one step of complete three-dimensional vectors—albeit in instrument-defined polar co-ordinates, which can then be transformed to a pre-existing co-ordinate system in the area by means of a sufficient number of control points. This technique is called a resection solution or free station position surveying and is widely used in mapping surveying.

Such instruments are “intelligent” theodolites called self-registering tacheometers or colloquially “total stations”, and perform all the necessary angular and distance calculations, and the results or raw data can be downloaded to external processors, such as ruggedized laptops, PDAs or programmable calculators.

A gyrotheodolite is used when the north-south reference bearing of the meridian is required in the absence of astronomical star sights. This occurs mainly in the underground mining industry and in tunnel engineering. For example, where a conduit must pass under a river, a vertical shaft on each side of the river might be connected by a horizontal tunnel. A gyrotheodolite can be operated at the surface and then again at the foot of the shafts to identify the directions needed to tunnel between the base of the two shafts. Unlike an artificial horizon or inertial navigation system, a gyrotheodolite cannot be relocated while it is operating. It must be restarted again at each site.

The gyrotheodolite comprises a normal theodolite with an attachment that contains a gyroscope mounted so as to sense rotation of the Earth and from that the alignment of the meridian. The meridian is the plane that contains both the axis of the Earth’s rotation and the observer. The intersection of the meridian plane with the horizontal contains the true north-south geographic reference bearing required. The gyrotheodolite is usually referred to as being able to determine or find true north.

A gyrotheodolite will function at the equator and in both the northern and southern hemispheres. The meridian is undefined at the geographic poles. A gyrotheodolite cannot be used at the poles where the Earth’s axis is precisely perpendicular to the horizontal axis of the spinner, indeed it is not normally used within about 15 degrees of the pole because the east-west component of the Earth’s rotation is insufficient to obtain reliable results. When available, astronomical star sights are able to give the meridian bearing to better than one hundred times the accuracy of the gyrotheodolite. Where this extra precision is not required, the gyrotheodolite is able to produce a result quickly without the need for night observations.