WHAT IS COASTAL ENGINEERING ?

Coastal engineering is a branch of civil engineering concerned with the specific demands posed by constructing at or near the coast, as well as the development of the coast itself.

The hydrodynamic impact of especially waves, tides, storm surges and tsunamis and (often) the harsh environment of salt seawater are typical challenges for the coastal engineer – as are the morphodynamic changes of the coastal topography, caused both by the autonomous development of the system and man-made changes. The areas of interest in coastal engineering include the coasts of the oceans, seas, marginal seas, estuaries and big lakes.

Besides the design, building and maintenance of coastal structures, coastal engineers are often interdisciplinary involved in integrated coastal zone management, also because of their specific knowledge of the hydro- and morphodynamics of the coastal system. This may include providing input and technology for e.g. environmental impact assessment, port development, strategies for coastal defense, land reclamation, offshore wind farms and other energy-production facilities, etc. 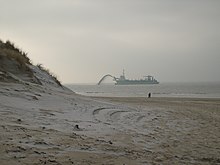 Beach nourishment at the Dutch coast.

Most often, in coastal engineering projects there is a need for metocean conditions: local wind and wave climate, as well as statistics for and information on other hydrodynamic quantities of interest. Also, bathymetry and morphological changes are of direct interest. In case of studies of sediment transport and morphological changes, relevant properties of the sea bed sediments, water and ecosystem properties are needed.

Classification of the spectrum of ocean waves according to wave period, by Walter Munk (1950).

The occurrence of wave phenomena – like sea waves, swell, tides and tsunamis – require engineering knowledge of their physics, as well as models: both numerical models and physical models. The practices in present-day coastal engineering are more-and-more based on models verified and validated by experimental data.

Apart from the wave transformations themselves, for the waves coming from deep water into the shallow coastal waters and surf zone, the effects of the waves are important. These effects include:

Living Off the Grid – Live Where You Want

Efficiency Before Renewables = Function Before Fashion

One thought on “WHAT IS COASTAL ENGINEERING ?”


Error: API requests are being delayed for this account. New posts will not be retrieved.

Why Keyboards have random Alphabets