An energy-efficient way to improve the performance of electronics systems would be to integrate microfluidic cooling channels into chips, to prevent overheating. However, state-of-the-art microfluidic cooling systems have previously been designed and constructed separately from electronic chips, preventing the channels from being integrated into circuits to provide direct cooling at hotspots. Because such integration greatly increases the complexity of chip fabrication, it would potentially increase the cost. Writing in Nature, van Erp et al.1 report an electronic device designed to have an integrated microfluidic cooling system that closely aligns with the electronic components, and which is constructed using a single, low-cost process.

Power electronics are solid-state electronic devices that convert electrical power into different forms, and are used in a vast array of daily applications2 — from computers to battery chargers, air conditioners to hybrid electric vehicles, and even satellites. The rising demand for increasingly efficient and smaller power electronics means that the amount of power converted per unit volume of these devices has increased dramatically. This, in turn, has increased the heat flux of the devices — the amount of heat produced per unit area. The heat generated in this way is becoming a big problem: data centres in the United States consume the same amount of energy and water to cool their computer technology as does the city of Philadelphia for its residential needs1.

Microfluidic cooling systems have great potential for lowering the temperature of electronic devices, because of the efficiency with which heat can be transferred to these systems. In general, three microfluidic cooling designs have been developed. The first is used to cool chips that are covered by a protective lid. Heat is transferred from the chip, through the lid, to a cold plate that contains microfluidic channels through which a liquid coolant flows3. Two layers of a thermal interface material (TIM) are used to aid the transfer of heat from the lid to the cold plate: one between the lid and the plate, and the other between the lid and the die (the wafer of semiconductor from which the chip is made).

In the second design, the chip has no lid, and so heat is transferred directly from the back of the chip through a single TIM layer to a microfluidically cooled plate3. The main drawback of these two approaches is the need for TIM layers — even though TIMs are designed to transfer heat effectively4, resistance to heat flow still arises at the interfaces between the TIM layers and the die, lid and cold plate.

An efficient way to overcome this problem is to bring the coolant into direct contact with the chip — this is the third general design. For example, bare-die direct jet cooling is a valuable technique in which a liquid coolant is ejected from nozzles in microchannels directly onto the back of the chip5–7. This approach cools highly efficiently because there is no TIM layer, and no changes are needed in the process used to make the chip. However, manufacturing the microfluidics device is generally expensive. Low-cost, polymer-based techniques8 have been developed, but are not compatible with the existing production and assembly processes for electronic devices. 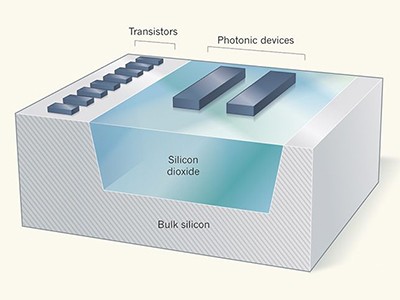 Another approach that brings coolant into direct contact with the back of the chip is embedded liquid cooling9,10, in which a cold liquid is pumped through straight, parallel microchannels (SPMCs) etched directly in the semiconductor device. This effectively turns the back of the chip into a heat sink, and offers great cooling performance. However, the die needs extra processing, compared with the other methods. A major drawback of SPMCs is that the pressure in the channels rises considerably as the fluid passes through, which means that a high-power pump is needed. This increases energy consumption and costs, and generates potentially damaging mechanical stress on the semiconductor device. Another big disadvantage is that a high temperature gradient is produced across the chip, which can induce thermo-mechanical stress and cause local warping of the thin die.

Three-dimensional cooling systems known as embedded manifold microchannels11,12 (EMMCs) have great potential for reducing pumping-power requirements and temperature gradients compared with SPMCs. In these systems, a 3D hierarchical manifold — a channel component that has several ports for distributing coolant — provides multiple inlets and outlets for embedded microchannels, thereby separating the coolant flow into multiple parallel sections. However, integrating EMMCs into the chips of power electronic devices increases the complexity and cost of constructing the devices. Previously reported EMMCs have therefore been designed and fabricated as separate modules, which are subsequently bonded to a heat source or a commercial chip to assess their cooling properties.

Van Erp et al. have made a breakthrough by developing what they describe as a monolithically integrated manifold microchannel (mMMC) — a system in which EMMCs are integrated and co-fabricated with a chip in a single die. The buried channels are therefore embedded right below the active areas of the chip, so that the coolant passes directly beneath the heat sources (Fig. 1).

The construction process for mMMCs involves three steps. First, narrow slits are etched into a silicon substrate coated with a layer of the semiconductor gallium nitride (GaN); the depth of the slits defines the depths of the channels that will be produced. Next, a process known as isotropic gas etching is used to widen the slits in the silicon to the final widths of the channels; this etching process also results in short sections of channels becoming connected to produce longer channel systems. Finally, the openings in the GaN layer at the top of the channels are sealed off with copper. An electronic device can then be fabricated in the GaN layer. Unlike previously reported methods for making manifold microchannels, van Erp and colleagues’ process requires no bonding or interfaces between the manifold and devices.

The authors also implemented their design and construction strategy to create a power electronic module that converts alternating current (a.c.) to direct current (d.c.). Experiments with this device show that heat fluxes exceeding 1.7 kilowatts per square centimetre can be cooled using only 0.57 W cm–2 of pumping power. Moreover, the liquid-cooled device exhibits significantly higher conversion efficiency than does an analogous uncooled device, because degradation caused by self-heating is eliminated.

Van Erp and colleagues’ results are impressive, but as with any technological advance, there is more to be done. For example, the structural integrity of the thin GaN layer needs to be studied over time, to see how long it is stable for. Moreover, the authors used an adhesive that has a maximum operating temperature of 120 °C to connect the microchannels in the devices to fluid-delivery channels in the supporting circuit board. This means that the assembled system would not survive higher temperatures, such as the typical temperature (250 °C) involved during reflow soldering — a process commonly used in the manufacture of electronic devices13. Therefore, fluidic connections that are compatible with the temperatures used in manufacturing will need to be developed.

Another future direction of research would be to implement the mMMC concept in a state-of-the-art design for an a.c.-to-d.c. converter — the design reported by van Erp and co-workers is a simple test case. Furthermore, the authors implemented only single-phase cooling with liquid water in their experiments (that is, the water did not get so hot that it became a gas). It would be useful to characterize the cooling and electrical performance of their devices in a two-phase flow-cooling system, in which heat is dissipated by the evaporation of a fluid. Finally, water might not be the ideal coolant for real-world applications, because of the risk of it freezing or coming into direct contact with the chip. Future work should examine the use of different liquid coolants.

Despite the challenges still to be addressed, van Erp and colleagues’ work is a big step towards low-cost, ultra-compact and energy-efficient cooling systems for power electronics. Their method outperforms state-of-the -art cooling techniques, and might enable devices that produce high heat fluxes to become part of our daily lives.

Aging Simulation of SBS Modifier during Service Life of Modified Asphalt | Journal of Materials in Civil Engineering | Vol 34, No 8