An inventory of plants for the land of the unexpected

“I left my revolver at home, but I certainly did not forget my notebook and pencil,” wrote the anthropologist Nicholas Mikloucho-Maclay in 1871 when first visiting a New Guinean village1. His was one of the earliest long-term research residences on the island, not far from the village where one of us (K.M.) was born. The difficulty of exploring and understanding New Guinea has rarely been underestimated — it has rightly earned its name as ‘the land of the unexpected’. Writing in Nature, Cámara-Leret et al.2 have shed botanical light on the richness of species there by generating a checklist that provides an inventory of the island’s vascular plants (those with water-transporting tissues).

The authors’ efforts have produced a list of 13,634 scientifically described plant species for the flora of New Guinea (which comprises Papua New Guinea and Indonesian Papua), of which 68% are known to occur only on the island. This tally captures the knowledge gained during nearly 300 years of scientific exploration, preceded by the 50,000 years of practical engagement with the flora that has occurred since human colonization of the island3. The botanical activities of these early New Guineans included the collection of wild yams and Pandanus nuts for food4, followed by the independent invention of agriculture5 and then of agroforestry. This approach of growing both trees and crops in the same place used nitrogen-fixing Casuarina trees 1,000 years ago, and has proved to be sustainable to the present day6.

Cámara-Leret et al. enlisted 99 taxonomy experts for the task of species curation. They began by assessing the available data, which indicated the presence of 23,381 named species. However, 42% of these names had to be excluded on the grounds of being taxonomically invalid (when a species has been given more than one name), or because the plants were erroneously reported as being found in New Guinea. This demonstrates the key role of expert taxonomists’ work in accurately curating messy biodiversity data. The discovery of new plant species in New Guinea continues unabated.

Disappointingly, it is unclear how many plants from New Guinea are still missing from the scientific record and are thus absent from the list assembled by Cámara-Leret and colleagues. The authors’ list includes 3,962 tree species, compared with 10,071 listed in an inventory for Amazonia7. The overall number of tree species in Amazonia is estimated8 to be around 15,000. This estimate is based on extrapolations from an inventory of all of the trees surveyed in 1,946 study plots, comprising a total area of 20 square kilometres — this surveyed total represents 0.00035% of the area of the Amazonian forest8. It has been suggested8 that most of the missing diversity will be captured only by intense and geographically widespread surveys, leaving us to speculate on the ecology and conservation status of Amazonia’s 5,000 ‘ghost’ tree species. 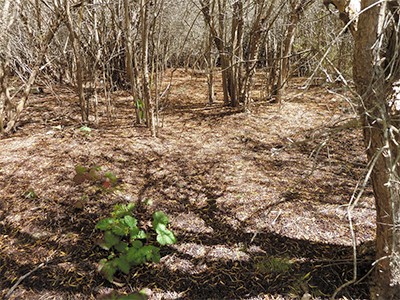 The situation in New Guinea is even worse, because the tree list generated by Cámara-Leret and colleagues cannot be assessed against a meaningful estimate of all the tree species present, owing to the lack of island-wide data from plant plots. A set of 300 plots covering a total of 3 square kilometres would match the sampling intensity achieved in Amazonia (which has forested land that is more than six times larger in area than such habitat in New Guinea)8. A National Forest Inventory9 currently being carried out for Papua New Guinea could provide such data, together with data from the 50-hectare plot being investigated by the international ForestGEO forest-research network; this plot represents a key facility for biodiversity research in the country10.

The 3,962 New Guinean tree species catalogued by Cámara-Leret and colleagues provide a resource base that supports a complex food web, including herbivores, predators, parasites and disease-causing agents (pathogens). Fifteen years of research in an area of the lowland rainforests (owned by K.M.) found that an average tree species supports around 250 species of herbivorous insect, and that the total number of herbivorous insect species increases by 50 for each additional tree species present11. A back-of-the-envelope calculation (ignoring differences in insect species between different geographic areas and habitats) suggests that, with 3,962 tree species, there might be up to one million different types of plant–herbivore interaction and around 200,000 tree-eating insect species in New Guinea.

One in five plant species on the list is an orchid, and, with 2,856 species, the Orchidaceae family is more diverse than the next seven-largest plant families combined. The evolutionary innovations that probably accelerated orchid speciation worldwide include pollinia (pollen parcels transferred onto a pollinator), an epiphytic lifestyle (an orchid plant grows on another plant) and a type of carbon-fixing photosynthetic process called crassulacean acid metabolism that is adapted to the arid conditions faced by epiphytes not rooted in the soil12. 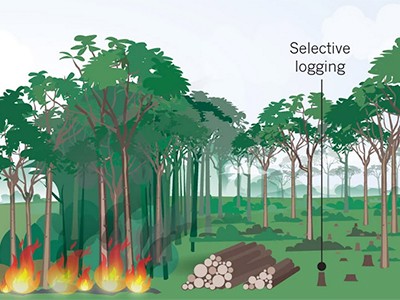 If, in a thought experiment, we imagine that all the orchids in New Guinea, with their low biomass, low number of associated herbivores, and specialized pollinators, were suddenly to disappear, the effect on most ecosystem functions would probably be rather limited, despite the loss of 21% of the island’s floral diversity. This is a cautionary tale against justifying biodiversity conservation in utilitarian terms, by ecosystem services, including carbon capture13. The most common orchid in New Guinea might be Vanilla planifolia (native to Mexico and Central America), which benefits from the human fondness for vanillin (one of the molecules that gives vanilla its flavour) that induces people to spread the plant to new locations and help to eliminate its plant competitors by clearing the forest, planting it and even hand pollinating it. Indonesia and Papua New Guinea rank among the world’s top vanilla producers.

Scientists based in Papua New Guinea have co-authored only 15% of the papers published on the country’s plants in the past 10 years, by our estimation from an online search of published papers (see go.nature.com/2eimuf2; search terms ‘All databases’, ‘Plant sciences’, Topic ‘Papua New Guinea’, ‘2010–2019’). At the same time, there is arguably no other country whose citizens are more knowledgeable about, and comfortable living in, rainforests (Fig. 1). New Guinea is the land of a thousand plant taxonomies. Insight into these plants has been developed by rainforest-dwelling societies speaking 1,053 indigenous languages, and orally transferred between generations14. For example, there are at least 578 ways to say ‘banana’, a native crop of New Guinea (see go.nature.com/2x2kcpt). One of us (K.M.) has based his botanical training on local plant knowledge, rather than university instruction, using his native Amele, a language spoken by 9,500 people over an area of 100 square kilometres.

Efforts should be made to develop a critical mass of biological expertise in Papua New Guinea (and Indonesian Papua, too), to boost the region’s profile as a globally attractive option for biological research. To build on the widespread interest in the island’s biology, research reform is needed, including an expansion of postgraduate education on the island, merit-based competition for research funds and closer integration of teaching universities with research institutes.

Industrialized countries have been better at transferring manufacturing expertise to tropical countries than at boosting research there. The attitude to international research also varies among tropical countries, being determined by the opposing forces of cosmopolitanism and parochialism. An index of the ease of doing biodiversity research, analogous to the World Bank’s index of the ease of doing business15, should be developed to rank the competitiveness of tropical countries vying for the limited pool of international expertise and research funds. The 2014 Nagoya Protocol for the Convention on Biological Diversity was meant to enhance international scientific collaboration by ensuring benefit sharing. Unfortunately, over-regulation has produced the opposite effect, stifling much-needed biodiversity research in the tropics16. Paradoxically, this might open up an opportunity for Papua New Guinea. Unlike Indonesia, Papua New Guinea is not a signatory to the Nagoya Protocol, and this might aid its efforts to become one of the most biodiversity-research-friendly countries in the tropics.

The authors’ plant list for New Guinea is an excellent start on a long journey towards obtaining a full inventory of New Guinean biodiversity — a necessary tool for ensuring plant conservation and sustainable use. It is crucial that New Guineans themselves, as the custodians of this biodiversity, should forge the path towards achieving this goal.