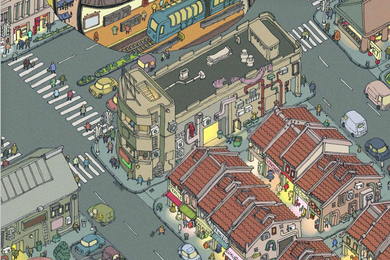 How many retail, food, and service establishments are there on the streets of New York City? How about Evanston, Illinois? Or Sacramento, California? It turns out the amount of urban street commerce is strikingly related to population size. The biggest metro areas in the U.S. have one retail, food, or service establishment for roughly every 120 people, while the smallest metro areas have roughly one for every 100 people.

Store clusters also tend to occur in predictable spatial patterns — with typically a few large clusters of stores, notably more medium-size clusters, and a lot of smaller neighborhood clusters, located at fairly predictable distances from each other. And store types are strongly affected by how often we visit them: There is one restaurant for every 445 people in U.S. cities and towns, but it takes around 13,000 people to support a bookstore in a typical U.S. metro area.

Of course, there are limits to these regularities. Myrtle Beach, South Carolina, has twice as many businesses as most places its size (thanks to tourists), while Brownsville, Texas, has many fewer. And plenty of neighborhoods within big cities either surprisingly lack shopping amenities or lose them over time.

In short, while urban commerce has clear patterns, it is still unpredictable and depends heavily on local conditions — including policies and planning. Enter MIT Associate Professor Andres Sevtsuk, whose new book, “Street Commerce: Creating Vibrant Urban Sidewalks,” published by the University of Pennsylvania Press, digs into the science of commerce and examines salient cases about sustaining main streets, from the U.S. and beyond, including London, Singapore, and Tallinn, Estonia.

While the book’s research was completed before the Covid-19 pandemic hit, the empirical principles detailed in the book should apply to the rebuilding of street commerce after the pandemic as well.

“We now have the spatial science for understanding where retail clusters work and where they will do well,” says Sevtsuk, the Charles and Ann Spaulding Career Development Associate Professor of Urban Science and Planning in MIT’s Department of Urban Studies and Planning. “However, this knowledge is not really absorbed into practice very much. City governments often still zone for commerce not really based on evidence about where it would work best.”

Where people encounter each other

In the book, Sevtsuk also makes the case that lively shopping areas do more than provide access to goods and services: They are civic and social spaces where people mingle and gain access to opportunities.

“Commercial clusters are one of the few remaining places in contemporary cities where diverse sets of people can encounter each other,” Sevtsuk says. “So they’re also important venues for community building and for democracy. … We encounter people of different incomes, classes, races, and interests along main streets, which helps us establish new social connections and better understand the society around us.”

And when retail clusters include locally owned businesses, Sevtsuk notes, “they really feed the local economy more than big box stores.” Spending at a local business, rather than a chain store, keeps more money in the local economy, because local establishments source more of their own supplies and services locally.

Convenient commercial streets, whether accessible on foot or by public transport, also help cities tackle climate change and emissions. Because over two-thirds of all trips people make are for commercial, social, recreational, and family purposes, walkable commerce lowers our carbon footprint, Sevtsuk notes: “The more errands and social activities we can complete without having to drive, the more sustainable and energy-efficient our cities will be.”

And yet only about 15 percent of Americans live within a 15-minute walk of a cluster of amenities. (Another 56 percent are within 3 miles of one.) In order to capture the social, economic, and environmental benefits that vibrant street commerce has to offer, cities should consciously plan and support street commerce, and not just in exurban malls, Sevtsuk argues. Just like transit-oriented development has become a widely accepted model, amenity-oriented development should too. In the book, Sevtsuk suggests a number of strategies and tactics to support and grow main streets, emphasizing novel policy tools like affordable commercial space requirements for new developments, which apply the lessons learned from affordable housing requirements.

For one thing, successful store clusters are more likely to crop up around spots of unusually good accessibility, such as street corners and intersections for small neighborhood clusters. Clusters of establishments are also more likely to develop at places that welcome them architecturally, featuring walkable streets that are easy to cross and ground floors of buildings that can be easily converted to retail spaces. And neighborhood clusters often benefit from larger anchor businesses like supermarkets, which produce a lot of foot traffic — something MIT’s Kendall Square Initiative has encouraged.

“It is often to everyone’s benefit to have a good supermarket or otherwise frequently attended establishment on the corner,” Sevtsuk says. “Anchors produce a positive ripple effect on nearby stores.”

Anchors are what Sevtsuk calls “complementary” to most neighboring stores, but having multiple groceries in close proximity rarely works, because they compete with each other. However, some thriving clusters do feature businesses that compete with each other, where proximity gives customers more choice and thereby attracts a larger clientele. Restaurants, clothing stores, bookstores, or antique stores, are often found shoulder to shoulder in competitive clusters that make all stores better off.

“Density is a real friend for commerce, though mostly people think about density in a negative way — having to share space and amenities with more people,” Sevtsuk says. “But density sustains amenities. And for retail clusters to work, we do not need a uniform swath of density everywhere, but rather local density, immediately along commercial streets and transit corridors.”

Planning for a rebound

“Street Commerce” has been praised by urban studies scholars; Ed Glaeser of Harvard University says it “provides an invaluable guide to the present and future of urban retail” and “reminds us that modern cities are built around gains from trade.” And while Sevtsuk’s work precedes the Covid-19 pandemic, he acknowledges the hardship it has had on business.

“I really feel for these business owners at the moment and I think inevitably we are going to have huge turnover, shops going out of business, new stores coming in, with a different retail market and different main streets emerging,” Sevtsuk says. Still, he notes, retailers have defied predictions of doom before, such as those involving e-commerce. Instead of vanishing, stores offering a richer customer experience have tended to thrive — and the balance of street business has tilted a bit more toward services and food establishments.

Ultimately Sevtsuk thinks there are several major lessons about helping street commerce flourish. There is no one-size-fits-all template for cities and towns, since each has a unique population, urban form, and history. Some are denser, some have better public transit, and some have long-established patterns of commerce that remain influential. But the same broad economic, organizational and spatial principles influence store patterns everywhere. Street commerce flourishes when city governments, civil society organizations and developers alike support and cherish it.

But while a corporation such as Starbucks has its own dedicated resources to identify good store locations and suitable building types, and to detect contemporary clustering dynamics, towns and cities typically do not. For that reason, Sevtsuk hopes policymakers and town officials can absorb the lessons of research and apply them to their own locales.

“There are certainly many things that a public official or planner can do to nudge the course of street commerce and support it,” Sevtsuk says. “If there is one good lesson from cities where street commerce has been successfully introduced, bolstered, or reinvented, or where the forces of gentrification have been equitably balanced, it is that successful street commerce almost never emerges or survives as a result of pure market forces alone. Good street commerce usually also represents the fruits of conscious planning choices.”