INTRODUCTION
Translucent concrete is a light transmitting concrete based building material. It works on the property of Nano-Optics. Its light transmitting is mainly due to uniform distribution of high numerical aperture Plastic Optic Fibres (POF) and hence it is also known as LiTraCon.It is produced by adding about 4% to 5% of optical fibres by volume in concrete mix. It was first mentioned in a Canadian Patent in the year 1935. As polymer based optical fibres and optical glass fibres were developed, it led to the increased rate of invention in this field.

MATERIALS USED
Some of the materials used in production of Translucent concrete are-
1) Cement– It is a binder material that sets and hardens after a definite period of time depending upon its type. Portland cement is the most common type used in constructions.

2) Fine aggregates- It is a chemically inactive material which serves the purpose of filling the voids in coarser particles. Hence it increases the strength and reduces porosity. Sand is mostly used for this.

4) Water- It should be free from all kinds of acids, alkalies, oils or other organic impurities.

5) Optical Fibres- An optical fibre consists of three kinds of elements:
• Core – It is a thin glass center of the fibre through which light emits.
• Cladding – It is the outer optical material which surrounds the core and it reflects light back to the core.
• To keep the reflection in the core the refractive index of the core must be greater than that of cladding.
• Buffer coating- It is a plastic coating which protects the fibre from any kind of damage. 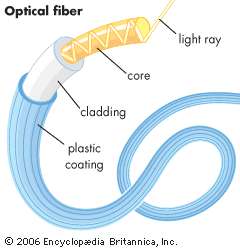 6) Waste Glass- These are collected from industrial wastes and are hammered, crushed into smaller pieces.

MANUFACTURING PROCESS
Various steps involved are-
1) Mould of steel or wood is prepared of rectangular size. Clay or mud are placed on the sides for easy demoulding as optical fibres are exposed to the mould. 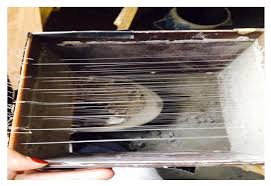 2) The optical fibres are cut in such a way that it can be placed perfectly inside the mould.

3) The optical fibres are placed in layer wise. Also, holes are driven on steel or wooden plate to let those fibres pass through.

4) The concrete mixture is then poured slowly with caution so that no disturbance is created to the optical fibres beneath.

5) Accumulation of void is prevented with the help of vibrating tables.

6) After 24 hours, the mould is removed and the mud is pulled off.

7) Then the extra-long fibres are cut to the same size as thickness of panel.

8) The surface is then polished with the help of sand paper or polishing paper resulting in finishes ranging from semi-gloss to high gloss.

APPLICATIONS
Some of the applications of translucent concrete are-
• It can act as a building material for interior and exterior walls. The rays of sun on falling on such concrete hits at a lower angle resulting in bigger intensity of light. 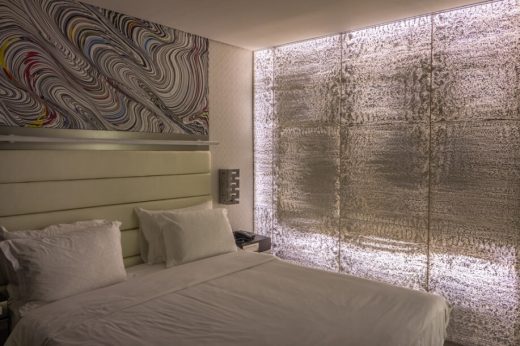 • It can be used as a pavement block. Also, it gives a shiny appearance during sunset and during daytime it perfectly seems as a concrete block.

• It can be used as partition walls between dining room and hall. 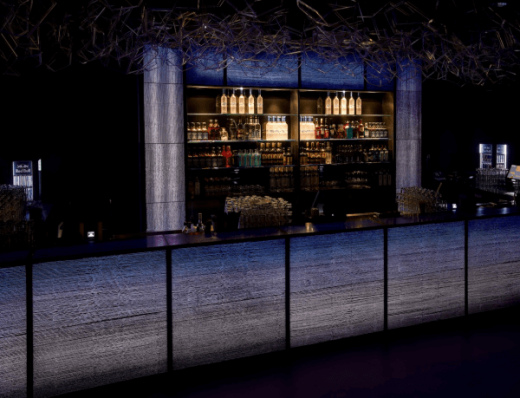 • It can be used to illuminate speed breakers on highways at night.

• It can be used in aircrafts or in buildings for showing the path to emergency exits.

• It can be also used on load bearing walls.

• It can light up dark subway stations.

DISADVANTAGES
Although such concrete is beneficial for use yet they posses some drawbacks which cannot be neglected. Some of them are-
• High cost of optical fibres.
• Requires skilled labours and supervision for casting.
• Cannot be used in column and beams as they do not possess much strength.
• Not effective from inspection point of view.
• Not effective where rays of sunlight do not fall.
• Maybe dangerous in handling as glass pieces are there.

These companies are working to create more affordable translucent concrete products through licensing in future and large-scale production. If more buildings use such concrete then lower power consumption will lead to a great climate change and hence more natural lights can be used. More electricity bills can be saved and health of people can be improved with natural light since many people are deficient in Vitamin D due to lack of sunlight and their bones become weak. So, this is another reason for growth of business.

CONCLUSION
Transparent concrete has good light guiding property. The ratio of optical fibre volume to concrete is proportion for perfect transmission. It does not lose its strength parameter as compared to regular concrete and it has best architectural appearance. This type of concrete will help in building greener earth and energy saver with its self-sensing property. Although its cost is more, in place of glass fibres plastic fibres can be used to reduce cost so that it can be used by all classes of people but it may also result in low light transmission. Its aesthecity is appealing to people and hence it is more used for making beautiful surroundings rather can structural point of view in case of load calculations. As time passes many industries are coming forward to adopt such innovation by making changes in its property so that they can deliver a better future.

Queation about the connection of Cisco WS-C2960S-24TS-S

Investing in U.S. Property from Australia

Queation about the connection of Cisco WS-C2960S-24TS-S

Investing in U.S. Property from Australia